Today I Stumbled Upon: No Action 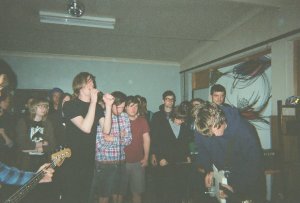 No Action in action

A sense of deja vu awaits as I leave the  summer drizzle descending from the clouds hovering over Glasgow and the a 24 hour flight to reach Adelaide, Australia. Yet here I am in the capital city of South Australia, the country’s fifth-largest city with a resident population of 1.29 million and the next stop on my virtual Old Man Adventure in Bandcamp. Adelaide is city with many stories emerging from its humble history. Prior to 1836 Adelaide was inhabited by the indigenous Kaurna Aboriginal nation. Today it is another ‘modern’ industrialised city dealing with its aspirations and tensions, which provide the perfect conditions for creative forces. Adelaide is also home to the joyous No Action.

Patti Smith once said, “punk rock is just another word for freedom” which I can relate too and is reflected in the reinvigorating army of small, independent, lo-fi, do it yourself bands beavering away in towns and cities across the globe. I get jaundice with people, normally men my age, who have deluded themselves with romantic memories of the 1977 punk scene as some type of musical year zero. This was not the case. The DIY garage band ethic has always been a feature in modern music with artists swimming against the tide, challenging convention and giving the middle finger to the corporations. My enduring memory from this period is not the bands who swore and spat their way into the headlines, but the small regional bands. The bands consisting of the neighbourhood shy boy who had secretly been scribbling down lyrics and the kid who had managed to achieve a 3rd chord.  A few weeks later they were to be found playing in a local pub, youth club or garage gig. The crap posters that seemed to look cool and the limited cassette run for your small group of fans. The results were often messy, but strangely beautiful given music ultimately is about people, having fun, celebration, connection and expression. No where is this reinvigoration more evident than through the band  No Action a self titled soul punk rock group. I like the injection of soul given this creative tension sums up the band perfectly.

Bandcamp comes into its own when you stumble across bands like No Action, who are an absolute gem to discover. Unlike most bands of this genre you never quite know what you are going to get with No Action be it 3 minutes of punk, a reflective acoustic number or indeed a mixture of both in a single track.  In an era of mass produced and corporately manufactured music No Action are a shining beacon of integrity. There blistering and brilliant  7″ vinyl Never Close/Riding in the Whirlwind is testament to this. Riding in the Whirlwind is a melancholic and bittersweet acoustic affair, “got a record no one wants to buy and a t shirt no one seems to fit. had a date with an empty bar” chronicling the struggles of a band and relationships. “Call me ungrateful, call me broke, call me when you’ve got the credit.”

Never Close is a different kettle of fish altogether, which opens up with pounding drums followed by a grinding bass. As Nick Godfrey (bassist with the band) explained to me, “The main influence on the Never Close song would be Silkworm and maybe Archers of Loaf but it sounds more like U2, the main influence on the Ride in the Whirlwind song was Comet Gain but it sounds more like You Am I or the Lucksmiths. The important lesson here is to BE YOURSELF and let your true creative voice shine through.” Personally, my observation would be the guitar work on Never Close is more aligned to Keith Levene (Public Image Limited) a quick search for PIL’s glorious Albatross track will confirm where U2’s The Edge stole his licks from.

A further No Action release I managed to obtain is the spilt cassette tape release (yes you heard me right a cassette tape), which paired No Action with UK band Plaids from Nottingham. Plaids provide a punchy angular punk/emo rock approach played out in frenetic pace against No Actions more subtle and gritty lo-fi tracks. So what where the influences behind the two tracks provided by No Action on the spilt release I asked Nick,  “The tape is a funny story so I’ll start with that. The acoustic song was one we originally wrote when we found out we were going to do a split release with Roger King from Bakersfield California, home of Korn and Merle Haggard. Up until that point Roger King’s solo output had been acoustic stuff, so we wrote and recorded an acoustic song that would match that. Then he sent his track to us and he’d done a rockin’ plugged in track! So we ended up palming our acoustic song off to the Plaids split.”

The two No Action tracks, which appear on the cassette, Nick rates the second track Solar Steps, as his personal favourite by the band to date, “It’s the most fun to play on the bass. It was the second song we wrote and we probably haven’t got any better since then. The rockin’ plugged in version of the Solar Steps song which will appear on our one-day-to-be-relased debut album is good too” And the

obligatory Old Man question, If the band had the opportunity to collaborate with any other artist or band who would it be Nick, “John, this is a really tough question that I’ve been puzzling over all weekend. I like the Mars to Stay band and what they’re all about, so I’m going to say them.”

No Action are a very coherent and exciting band who in many ways defy logic. Bands like this tend to take a single approach when facing  their musical crossroads. It is refreshing to hear a mix of influences as a platform rather than a band simply trying to replicate something they’ve heard elsewhere. So we end up with creative tensions.  Grinding punk, which is not simply trying to get as much noise and lyrics stuffed into the required 3 minutes as possible, alongside subtle acoustic offerings. The lo-fi recordings just add the imperfections that make these recordings stand out from the crowd. I can’t wait for the album when it does finally appear.

You can also enjoy further No Action tracks on their Soundcloud site and keep up with their journey via their Facebook page. Enjoy and respect.