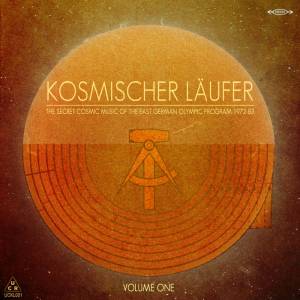 Sometimes you’ve just got to acknowledge you are late getting to a party. The Secret Cosmic Music of the East German Olympic Program 1972 – 83 is just an excellent concept and most importantly backed up with some truly exhilarating music. The narrative goes, “for the first time since it was recorded in East Berlin over 30 years ago, the music of Martin Zeichnete can finally be heard. A disciple of the Kosmische Muzik of the likes of Kraftwerk, Can and Neu! that was drifting across the Wall from the West, Martin’s idea of using the motorik, hypnotic beat of krautrock in the training of athletes was taken and exploited by the DDR’s Olympic Committee.”

My introduction, I have several memories that are managed over the years to blend together into a romantic melting pot of musical discovery. It is difficult to separate truth from fiction now, but the timing is pretty much self-evident. I know it was during a period of school exams, so I’m guessing it was around 1976 when my ears first discovered what I would get to know as Krautrock. That genre of experimental music, which had emerged in Germany in the late 1960s drawing influence from psychedelic rock, the avant-garde, electronic music, funk, minimalism, jazz improvisation, and world music styles.

I know some of the punk bands I was starting to listen too had referenced the likes of Kraftwerk, Neu and Can. My music teacher, Mr Bell had given me a copy of one of Kraftwerk’s early albums, which I still have to this day. Maybe, I’d subconsciously developed a liking for Krautrock as I listened to John Peel show on my radio while preparing for exams.

How my admiration for Krautrock developed I guess I will leave to my fond memories, no matter how clouded they increasingly become. Today, I’m happy to just stay behind the illusion of the Secret Cosmic Music of the East German Olympic Program 1972 – 83. I did start to do some research, but you know what? As we continue to consume ourselves a little piece of escapism, which transports us back in time to a period where things seemed a little bit simpler, black and white, may not be an altogether bad thing now and again.