It must have been a few days into my adventure, or maybe time had alluded me. After all making your way through a diet of mainly intense punk, metal and electronic scream music your mind does start to play tricks on you. In the midst of this orchestra of noise and anxiety up popped Bartley Hinson and his album Jogging in the Sand. I sighed with delight, my heart flickered and my ears popped open. You see the discipline of my adventure is to listen without prejudice, but to listen to a ukulele Mr Hinson, you are surely testing me?

The ukulele as a credible musical instrument has a dogged history in the UK. Principally associated with the institution that is George Formby (1904-1961) a British singer-songwriter, comedian and actor who sang light comical songs usually playing his ukulele/banjo. Formby was the highest paid entertainer of his time with songs like, ‘When I’m cleaning windows’ and the controversial ‘With my little stick of Blackpool rock’ which was banned by the BBC due to its suggestive lyrics. Formby and his wife travelled throughout the Second World War cheering the allied troops up by creating improvised songs to fit the situation. 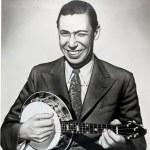 In a similar vain Bartley Hinson took a ukulele backpacking and ended up writing these songs and following a chance encounter with his old friend Devon Cole jump-started the recording of the songs and their release in October 2013.  Jogging in the Sand consists of Bartley, lead vocals, ukulele, guitar, bass, organ, keyboard, percussion, kazoo and Devon Cole backing vocals, drums, percussion, guitar, synth. And impressively self recorded in a barn too.

The album opens with I Really Meant to Try (But It’s Too Late) an ode to meaning and drive in a world of awash with apathy. Whilst in contrast the bitter sweet Short-Changed is coated with the lyrics ‘good fucking luck to you and all your schemes.’  Don’t Think I Spent My Money Wisely and the album title Jogging in the Sand are joyous romps about everyday daydreams and life’s frustrations. The tender Here’s What You Remind Me Of brings the traumas of fragile love and regrets. Sittin’ Around returns to the themes running through the album teenage ambition, motivation, apathy and anxiety starting, ‘I put on a new shirt this morning recently that much ambition has been rare.” and ending, “all that is left is the shit.” The album comes to its end with my fav song on the album The Guerilla Radio Won’t Come In! a ukulele  Rage Against the Machine infused track about growing up, the dilemmas regards the rites of passage to becoming an adult, selling out, greed and consumerism are all laid bare from a young man perspective. “I wish the car bombs on the news made the TV explode”  and the crushing finale and bitter ironic words “this is how a revolution ends”

I caught up with Bartley via email exchange and asked him about the album and the influences behind the songs.

“It’s nice to see people of any age seeking out new music instead of just mindlessly consuming or sticking with what they already know. Last spring/summer when I wrote the songs, I was listening to a lot of Patrick Schneewies (Johnny Hobo & The Freight Trains, Wingnut Dishwasher’s Union, Ramshackle Glory) and Cranford Nix (The Malakas). They’ve both got a great combination of angst and humor/intimacy which inspired me to start writing more honestly than I’d been able to before. My favourite track on the album is I Don’t Think I Spent My Money Wisely It’s fun to play, plus I’m broke as shit. I’m hoping to do another album with Devon (aka Earth Person).”

Not only is this an accomplished album, but it comes from the heart and a level of honesty that is rare.  In return I have learned to listen behind the notion of  the UK ukulele syndrome thanks to Mr Hinson. Amongst the humour and fun of this album lay profound lyrics, which are not a million miles aways from the punk scene of my teenage years, but what really comes to mind upon reflection is The Who’s classic My Generation – I hope I die before I get old!

Mr Hinson I Love this album.

Buy it on Bandcamp for name your own price (don’t be a skinflint!). You can also find Bartley’s 2013 Strawberitas on the same Bandcamp page under the name Bird Machine (great name), strangely I could not hear much ukulele on this track?