The snap of the letter box and a cassette lands on the doormat following my latest purchase from Bandcamp, which is the first cassette I’ve bought in many years. There is something subversive about cassette music, which can either label you a pretentious anorak or the member of a cool club. Whatever your preference I feel like a member of the cool club today.  I find myself  in Canada on the next stop of my adventure and I have arrived at the delicate ambient haze of Chuck Blazevic and Alice Hansen better known as You’ll Never Get to Heaven. They have recently issued the EP Adorn on a limited cassette format release, as well as download.

You’ll Never Get to Heaven are from London, Ontario and like the name sake on this side of the pond London is a melting pot of creative energy and influences. To the east we find New York, to the west Detroit to the north Toronto. London, Ontario is no stranger to musical innovation being home to the rather brilliant and eccentric Nihilist Spasm Band. A band with the ability to make the listener excited, laugh, cover their ears and appreciate all at the same time. Think of Captain Beefheart’s classic album Trout Face Replica in warped condition, playing backwards, at the wrong speed and you start to get the picture. I mention this purely to draw attention to the rich tapestry and creative environment You’ll Never Get to Heaven inhabit, which must surely provide immense influence.

You’ll Never Get to Heaven are the type of electronic band I enjoy greatly, but I must start with my prejudices. Having lived through the 1980s and the onslaught of synth drums infused in over produced medico music. At best this was  highly regrettable, but thankfully quickly forgettable. For every Joy Division sat a myriad of New Romantic lost souls who sought self indulged enjoyment from wearing  stupid customs, donning silly haircuts, trained like monkeys to press a few buttons rather than create music that would be savoured beyond its immediate sell by date. It is true the likes of Gary Numan, Orchestra Manoeuvres in the Dark and the Human League provided some initial interest, but you can only pretend to be a droid for so long until people start treating you like an elaborate teas-maid.

My key contention is aimed at the producers of the time who simply sought to replicate traditional instruments and song structures rather then use new technology to innovate. The effects of this bastardisation left scars in my psyche resulting in me instantly rejecting electronic music as a serious force other than Kraftwerk, Eno, Rodion G.A, Harold Budd, etc. Rightly, or wrongly my record collection would occasionally submit to the odd electronic based track, but nothing substantial. There was little change in my mindset until Aphex Twin’s sublime 1994  Selected Ambient Works Vol 2, which went on to unlock  my ears to groups like Autechre. 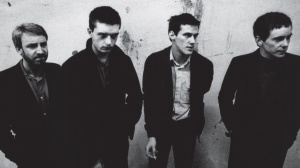 More recently the increased accessibility to make electronic music with little effort through most computers has delivered a variety of outcomes from the sublime to the largely predictable. In this democratisation of music production it is refreshing to stumble across bands like You’ll Never Get to Heaven whose influences can be seen and heard, but importantly do not simply seek to replicate what has gone before.

The gentle distorted soundscapes, twisted samples and warped beats create a dream like platform for Alice Hansen’s fragile vocal to drift aimlessly like a child exploring a lost magical world. Firstly the influences I hear in their music.  My record collection includes a variety of early Brian Eno albums and given the Adorn release makes reference to Eno this would be a rather lazy reference to make. Vocally I hear hints of early Elizabeth Fraser (The Cocteau Twins) or Tracey Thorn (Everything But The Girl), especially the tracks Thorn recorded with Massive Attack for the Protection album. The overall production I find interesting because whilst the aforementioned bands utilised more traditional beat and melody structures to create catchy pop songs You’ll Never Get to Heaven have ventured down a different lane. The result is creative tensions, which provide the freedom for the duo to roam, explore and experiment endlessly.

Lurking under the soundscape structures I find fragmental influences from the Boards of Canada (Geogaddi album) and early Sigur Ros (Lek album), which leans more to the structures of classical music than pop. Beats are deployed with intelligence, sometimes sparingly leaving silence to contribute effortlessly to the overall effect (especially when listening through headphones). Via my trusted laptop and the powers of email I managed to hook up with Chuck Blazevic and presented him with the Old Man Adventure questions.

JK:     What was the main influences behind the album?

JK:     Which is favourite track and why?

CB:    ‘Caught in Time, So Far Away’ is the most recent track on the EP, so, in this respect, it feels a bit more exciting to us than some of the older tracks on this release.

JK:     If you could have a guest artist to appear on your next venture who would it be (dead or alive) and why?

CB:    We’d love to work with Brenda Ray (of Naffi/Brenda and the Beachballs) if given the opportunity. She has the best vocals and her productions often strike that delicate balance between raw immediacy and ornate elegance.

You’ll Never Get To Heaven – Adorn

“If you’re happy and you know it clap your hands”

The Adorn EP opens with Caught in Time, So Far Away with its carefully crafted synth drum beat, textured layers and pitch perfect vocals make this a mighty and clever pop laden introduction. Whilst the track is highly enjoyable it also misleads the listener into a false sense of ease as we enter the deeper material contained on the EP.

By This River is a slower and more thoughtful piece all together. Simple and devastatingly in delivery.  Unravel  takes us deeper down like a gramophone record playing effortlessly in a cabin on the sinking Titanic. Adorn is a magnificent, dense textured 4.25 minutes of shoe gazing brilliance. The beat plays perfectly with the vocals to leave the listener slightly disorientated. Enfantillages Pittoresques: Berceuse is an intoxicating music box with slightly out of synchronised keys. Derived from the Erik Satie’s piece, which can also be found on the David Bowie ‘The Man Who Fell To Earth’ film. The result is truly haunting and  beautiful.

The EP comes to an end with Closer, which is a further 2.44 minutes of soundscapes, but on this  occasion the Titanic sits broken on the seabed until its discovery some 73 years later. Together this  is one of the most beautiful set of tracks I have heard in this genre for a long time. Almost impeccable in making the listener warm, distant and slightly disorientated. It comes highly recommended from this adventurer.Buy it now.