The long journey up north past my native North East over Hadrian’s Wall and to Glasgow where the wonderful Electric Company Label is beckoning me on the next stop of my old man adventures. Unknown to myself, well until I wrote this blog, I have a deep appreciation of the Scottish rock scene beyond the parody that is Rod Stewart. I will blame Rod for my ignorance given he inflicted his phoney Scottish jiggery pokery on me from a young age, caused serious trauma and inflicted Scottish blindness. At a time when any self respecting youngster was exploring The Clash, Pistols, Damned, Ramones and Buzzcocks, Rod in 1977 released his Hot Legs single from the equally bombastic album Footloose and Fancy Free. Unlike now there was no fast forward on live TV, so we duly had to sit through Rod swinging his thing before 3 minutes of punk was allotted its given time on Top of the Pops. My trauma was recently reinvigorated when I discovered Bon Jovi apparently perform Hot Legs occasionally as part of their live set, but a quick google search for Rod Stewart 1970s and then Jon Bon Jovi 1980s and it all makes perfect sense.

Anyway enough of this nonsense. A quick dig through my music collection whilst preparing this blog reveals  Jesus and Mary Chain, Primal Scream, Teenage Fan Club, The Vaselines, The Rezillos, Belle and Sebastian, but to name a few all lurking there and all originate from Scottish shores. I hold my hand up in shame and accept my ignorance, which I take responsibility to tackle.  As with any vibrant music scene an ecosystem is required, which is is independent, experimenting with the past and probing the future to produce a glorious wall of sound. This cultural ecosystems by its very nature is often known only to the locals until a buzz emerges, but the rise of the internet has created opportunities for the virtual traveler to be exposed to these gems. This is particularly rewarding when, if like me, you have a leaning towards lo-fi fussy guitar rock and sublime songwriting with twisted lyrics that often fail to penetrate the mainstream pop world. Yet it is these humble cultural ecosystems, which create the fertile ground for mighty musical oaks to grow and the catalogue of Glasgow’s Electric Company label sits there like a shiny emerald.

Launched in April 2013, Electric Company release and distribute music by some of the most exciting and forward-thinking artists, on a wide range of formats, including vinyl, cd, cassette and digital download. Boasting a passion for DIY ethics and armed with their own studio enables the label to support artists to be heard without the pull of corporate strings. This in turn creates  a unique artistic hub where everything from recording, artwork and merchandise to live booking can be done in house and purely for the love of music. As with any small business running an independent music enterprise takes nerves, commitment and to a certain degree of passion bordering on obsession. So it is always an immense pleasure  to stumble across a label like Electric Company. On my initial dip into the label’s catalogue I purchased 3 offerings.

Released on a limited run of 250 copies Cyclothymia is a pulsating 3 minutes 27 seconds of glorious guitar infused post punk delivered at Ramones break neck speed whilst Homily is reminiscent of Joy Division (before the hype) at their desolate best. The band follow up release Barbarossa which is also available on Bancamp (name your price offer) demonstrates a band growing in skill attitude and craft Provided with the right opportunities and presented with the necessary good luck all artists require this band have all the credentials to develop into something rather special.

The Release EP is a collection of 6 brilliantly twisted pop songs. Athough I feel it only right to give you a little warning before you take a listen. Beneath the pleasant beats and harmonies are some rather spine chilling lyrics, which make one feel the songwriter was abandoned on the steps of a church at birth and left to be reared by a couple of zealots. The sublime opening lyrics to Shallow Grave, “I hope you fail in love, I hope you break your heart, I will be your enemy, I’ll be your shallow grave” are just about the most soberingly and brilliant opening lyrics for a track I’ve heard for quite some time. Each track on the cassette comes in at about 3 minutes, which means there is little too no fat in production and delivery.

Four bands, four songs for four quid no bad going and a cassette thrown as well. The cassette opens with Twin Mirror’s New Edition a good old fashioned punk rally. Secret Motorbikes – Is Dis 4 real a swaggering pop anthem. Deathcats – Saturday Night Golden Retriever a guitar riffed to the ceiling romp. Future Glue – Time to Kill a burning blend of punk surf meets 1950s trash rock. All together this is a mighty fine split tape, which is ready made for rolling down the car window on a warm summers evening and terrifying the neighbourhood.

My ignorance has been well and truly laid to rest and like Bristol, Manchester, Liverpool and London, Glasgow is up there with the best and I thank Electric Company for the education. 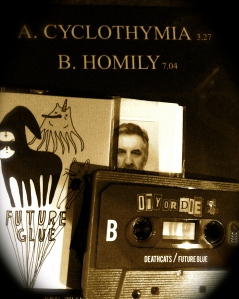