In a world of over produced mediocre music it’s a joy to stumble across Mouth Reader from Murfreesboro, Tennessee who are an antipathies to the polished music industry machine. Whilst a heavy nod of respect goes to the garage bands of the 60s and 70s Mouth Reader are a stunning lofi band, full of energy, fun and wonderfully messy. As Kyle Frary (guitarist, vocalist, art) from the band explained, “me and Ethan (the drummer) had both been playing in local bands for a few years and had actually been in a band called Rajhi Gahler together for about a year when we decide to start Mouth Reader. We’re both very motivated and just wanted to be putting out more music and art than we were able to in our current situation. We don’t really want to be the most successful band around or to be played on top 40 radio. We just want to travel, meet cool people, play as many cool shows as possible, and really just have fun. We just kinda take things as they come and do what seems right.” 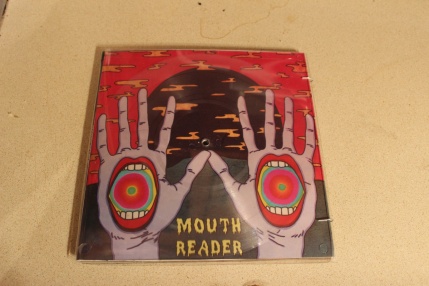 As well as maintaining a healthy integrity towards the art of music making Mouth Reader also take pride in their physical releases. An art form in itself that stalled with the birth of digital downloads. The bands latest release ‘hands’ is a limited edition playable pop-up book, “We put a ton of effort into making our albums stand out. We just think of things we would think are cool and do them! Hahah. Most of the time were scrambling to get them together last minuet but I guess we kinda like it that way” Kylie explained.
When asked about what are the bands favourite tracks of the new release Kylie gives the nod to “I Woke Up” and I’m pretty sure Ethan’s is either “Waiting” or “Freak.”
What are the influence are sitting behind the the members of the band? “I listen to a ton of Ty Segall, Thee Oh Sees, Meat Bodies, Mr. Elevator and the Brain Hotel, King Gizzard, King Tuff, Jacuzzi Boys, and a bunch more. The Black Angels have definitely influenced a few songs like “The Widow” for example. Ethan has an enormous appetite for all kinds of music though, everything from metal to hip hop to country and jazz. I have a hard time keeping up with everything he’s listening to. So who would be the dream co-conspirators in the future? “Well if I had to choose, I’d probably pick Jon Dwyer. Although I’m a huge Damon Albarn fan and it would be cool to see what he’d do with one of our songs.” When a band wears its influence on their sleeve they need to be good and I can testify that Mouth Reader are very good indeed.