If you live or find yourself in the Bristol area before the 5th April 2020 then I highly recommend you pay a visit to Spike Island Bristol and immerse yourself in the Pacita Abad, Life in the Margins Exhibition. A collection of the photographs I took during my visit are below, which barely do the exhibition justice. A thoroughly enjoyable, beautiful and engaging exhibition. You can find a link here, which gives you all the information you need, including directions. Free entry (donations welcome). 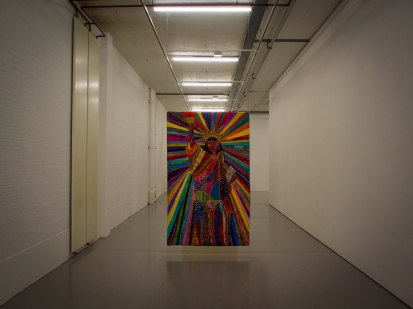 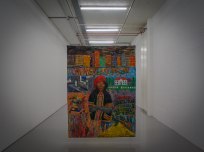 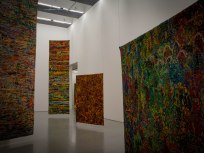 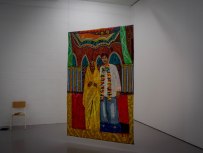 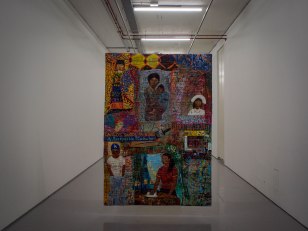 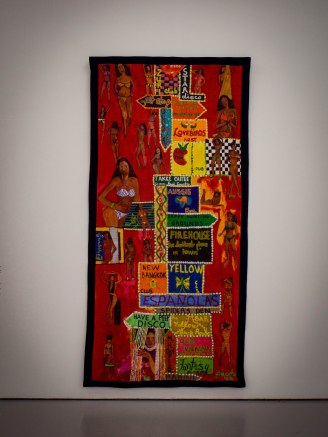 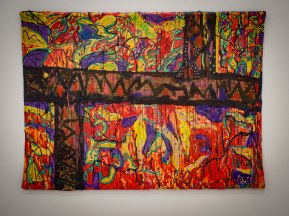 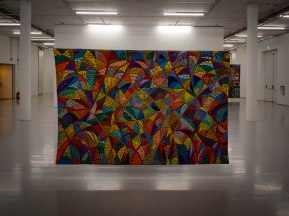 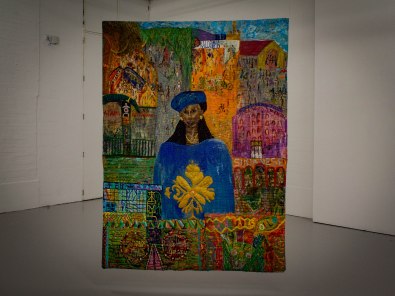 An unplanned stop on route to the Lake District at the Rheged Centre, Penrith, Cumbria. It’s a place where the arts meet  food, shopping, and cinema, including live streaming of opera and ballet can be found under a green grass roof. I took these photographs from an exhibition at the Centre. 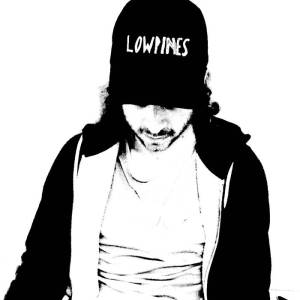 Opting not to search for meaning through the choreographic medium of aggressive guitar and drum or indeed the synthetic doldrums of pop music can be a hazardous route to follow given the abundance of wannabe singer/songwriters desperate to discover the elusive steps to the stage at Wembley Arena. As with any musical explorer if you are prepared to look hard enough then the real stuff will always float to the top, which brings me onto Lowpines.

Lowpines build songs on fragile foundations where tilting structures are exposed to the elements of a desolated environment, which allows the lyrical intimacy of each song to resonate. Scrambling through the Bandcamp jungle one evening in 2015 this musical explorer stumbled across Lowpines self-titled  full-length album. The album’s opening track ‘October’ is a self-assured opener that would not go a miss on a Lambchop, Nixon era album. The quality of songcraft is carried throughout the album and has become a regular headphone destination when seeking to escape the stress of everyday life.

Who are your musical influences and why? I think my musical influences are always changing. I’m forever finding new things to listen to, and hearing new things in records I’ve listened to for years. It’s rarely a particular artist or song that’s inspiring, so many bits of things I hear in different songs. I start wanting to listen to how the different pieces stuck together and make new songs out them. I’ve been obsessing over drum sounds recently, how they can completely change the tone of the whole song just with the kind of reverb or distortion or whatever. The sound of recordings has always been something I’ve been fascinated by, and certain patterns in the records jump out to me. Eels, Sparklehorse, Bonnie Prince Billy, Elliott Smith, Shins, Smog. Records that sound like they’re recorded close-up, so you hear the details, the mistakes, and breaths, the things that make it real.

What music was playing around the home when you were growing up? Classical music, all the time. I couldn’t say what exactly, but that’s what my parents played and taught. So it was a constant feed of music heard from the next room, that I never got to know by name. I never actually engaged with it, not in the way I’d get hooked on the Beatles or Nirvana or pretty much anything with guitars and drums when I eventually discovered it. I tried learning instruments and learning to play classical pieces, but I found it way too stressful having to play what was written on a page note for note. I wanted to make up my own tunes and make records. So I borrowed a guitar and got a tape 4-track and set about trying to figure out how to play, sing, write songs, make a record. Still figuring that out…

What is your view on the current state of the music industry? It’s interesting, seems to be changing all the time. I think for a lot of smaller indie labels and DIY artists, those who never planned on selling a lot of records anyway, it’s never been easier to keep being creative and reach new people with your music. Huge profits were never part of the plan so they don’t miss them in the way big record labels must do. Sure, it’s hard to make any money, but we just have to try and be inventive with how we do that, I don’t see any sense looking backwards. There was a time when sheet music was big business, songwriters at the time must have thought recordings were the death-knell of their trade when they first started being manufactured on a mass scale.

How old were you when you first performed live, where and what song did you perform/sing? The first time I got up on stage with a band, I was about 14. Along with my school friends had formed a band and played our debut show during lunch break in the school coffee bar, to about 40 other students. I sang Basket Case by Green Day. Almost certainly ruined it for a lot of my peers but I that didn’t cross my mind at the time.

Tell me about a song (by another artist) that has remained with you throughout the years – why does it matter? One song I consistently come back to is Dylan’s ‘Farewell Angelina’. I never tire of it. It goes on and on, verse after verse, getting stronger all the while. I think one of the things I like most about Bob is he sets a mood for a song and then just seems to have fun with the lyrics. I don’t think you can ever take him too seriously, which makes records a good companion. It’s up to the listener to do the work and figure out what they hell it may or may not be about.

What other career choices did you consider and what made you chose to be a musician? About 8 years old I thought I’d be a writer so I sat down to write my first book. Half a page later I was exhausted, my hand hurt from writing, and I was all out of ideas. So I scrapped that idea and decided to focus on songwriting. Fewer words needed. I don’t think I ever made a decision to be a musician but just knew that’s what I was doing and had no interest in doing anything else. I guess I just assumed it was a given that it’d be a viable way to spend my life. Fingers crossed.

Tell me about the creative steps between writing material and then performing it for the first time. It varies greatly… Some songs arrive fully formed like they just fell out of the guitar or something. So those ones I tend to take out and introduce to some people, see how they get along. But more often than not I spend some time creating a lot of the song within the recording, layering up and adding parts as I go. So once its done I have to start over figuring out how I’m going to play it live, with or without a band. I don’t see the shows as a reproduction of the record, more a response to wherever I’m playing and who I’m playing with.

I love the track ‘Loose Canon’ from the 2015 album. Tell me about the song. Thanks. That was one that fell out of the guitar… I was a bit suspicious of it for a while, I couldn’t see much of myself in it. I was reading a lot at the time, mainly short stories and some of the people and places I was reading about were actually lodged in my mind. I think the song belongs to them. But after trying out live a few times, it seemed to settle in, and now we get along just fine. In a way, it’s about exactly that, finding something of yourself somewhere you didn’t expect it, and not being totally sure how you feel about it.

The ‘October’ track from the same album makes me very melancholy and yet strangely uplifting. Tell me about it. October was written in January the previous year. I guess it’s about having a marker point in the year where you take stock of things, looking forward and backward and deciding if you’re on a right trajectory. October is that month for me, summer is over, and we’re often back out on the road playing shows. The leaves are turning, the end of the year is in sight, so it’s a good moment to consider if you’ve done the things you set out to do while there’s still time to do something about it. I wanted the song to have a good balance of reflection, regret and resolve, and also humour. I think any kind of self-reflection needs fun, or you just get too bummed out to do anything.

That Bridge Washed away in the storm (2016 release) in many ways (to me) seems increasingly reflective – what were the influences driving this new material especially on tracks like ‘No Hercules.’ This song on this record started out as entirely fictional, based on stories borrowed from books and films. I wrote all the songs over a week, from notes and little scraps of recordings I’d done through the previous year. I soon started to recognise a lot of things that actually applied to me, reflecting my own experiences. So I started digging into those memories and seeing how I might be able to weave it all together. By the time I’d finished it, I couldn’t remember what I’d made up and what actually happened. ‘No Hercules’ started from an idea of someone finding strength in pretending to be strong and accepting that they may have bitten off more than they can chew. I’m sure most people find themselves doing that to some degree at one time or another. I think I also wanted the song to have a definitive end point, to draw some conclusions. The minute I finished mixing it I started writing new songs, and it felt lighter like I’d drawn a line under something. I’m not sure what, but I think the next songs will form a new chapter somehow.

What does the rest of 2016 look like for Lowpines? So far, I’ve spent most of this year writing and recording, and there’ll be lots more of that. I try to move around as much as possible when I’m writing, so I’ll be travelling quite a bit. I think the songs benefit from a change of scene while they’re being written. It’s easy to get a bit short-sighted if everything is written and recorded in one place. I like to hear the songs in different lights, different climates. They can sound so different. Other than that, I have some shows dotted throughout the year. I’ll be playing in Norway in the summer for Indiefjord Festival, which I’m excited to be playing at. I grew up surrounded by mountains, so the Fjords sound like somewhere I should take my songs.